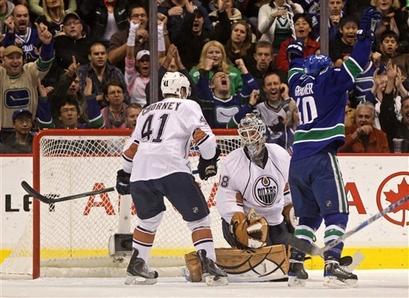 Micheal Grabner scores against the Oilers.

With six players currently on the IR list, winning three games in a row is not a regular occurrence for most teams. Lately the Canucks have beaten the Black Hawks, Maple Leafs and most recently the Oilers. Things appear to be pointing in a more opportunistic direction. Daniel Sedin sustained an injury during a win against the Canadiens on October 7th.Since then Salo Rypien and Wellwood have become causalities. More often than not such a myriad of wounded players is a hindrance to any team. Surprisingly this is not the case for Vancouver, who has only lost two of their last eight games. The list of injured players may soon be a tad lighter. Rypien could be back in the lineup for the next game against the Red Wings. Salo’s return might be much sooner than anticipated. Sedin and Hansen are both making steady progress. Unfortunately Demitra is going to be out indefinitely. Mathieu Schneider has already been removed from the IR as he made his Canucks debut on Sunday.

Vancouver’s last defeat was on October 19th 2-1 to the Oilers.So what can be attributed for this positive turn of events? In the last three wins the second line of Raymond Kesler Grabner has been very productive. Michael Grabner has scored two goals and two assists. Mason Raymond has two goals Ryan Kesler has two goals. The play of this line is proving to be a real workhorse, at times outplaying the first line. After an uneventful preseason it was no surprise to see Grabner sent back to the Moose. When he was recalled on October 14th, most people were scratching their heads and questioning why. He has really shown that he is a valuable member of the team; he’s been a great fit with Raymond and Kesler. Kesler a veteran player is proving to be the catalyst, for what is becoming the most prolific tandem currently on the ice for the Canucks.

For a while Henrik Sedin seemed to be missing his shadow Daniel.Henrik went on a three game scoring drought but scored the game winning goal against Edmonton on Sunday, with assists from Samuelsson and Hordichuk. Sedin played with Samuelsson and Shirokov on the first line. It’s customary to see Alexandre Burrows play on the top line but against the Oilers he played on the third due to the fact that the first had been struggling to find any real offensive production.

In the Canucks most recent game Luongo record his first shutout of the season elevating him to being the Canucks franchise shutout leader. When you consider that last season he recorded nine shutouts, he still has a little way to go before he beats that. Starting the season with a save percentage averaging around the .818 mark it is now in the region of .900. It’s not hard to see the transition is being made to the elite goalie that he is known for. Rather than the poor play he has demonstrated of late.

The next opponent to face Vancouver will be the Detroit Red Wings.The Wings generally would be considered a superpower in the NHL. Though this season they do not resemble that image. With three consecutive losses, Detroit is in a frantic battle to find a winning form. With injuries to Johan Franzen and Andreas Lilja they are facing some adversity. Franzen is Detroit’s expert screener and fore checker who could be out of action for at least three months. To make matters worse the main issue of concern facing the Red Wing’s is that of goaltending. Detroit is often out shooting opposition, but losing games because of the inconsistency of Osgood and inexperience of backup goalie Howard. As always playing Detroit will be an arduous task with the likes of Zetterberg and Holmstrom to name but a few, causing problems for any team.

For Mikael Samuelsson this game will hold some significance, as he will be facing his former Detroit teammates. On November 24th 2008 The Canucks faced the Red Wings in their first game of the season without Luongo .In the previous game he had incurred his infamous groin injury. The Canucks won 3-2 in OT. They may have more injuries currently, but if the last three games are an indication of what to expect, then the next may well be a hotly contested battle.

This article is a guest article from Hockey World Blog reader James C. Edgington and the assistance of  Wings blogger rocknrollnobody. Please visit them at PenaltyKill.net.