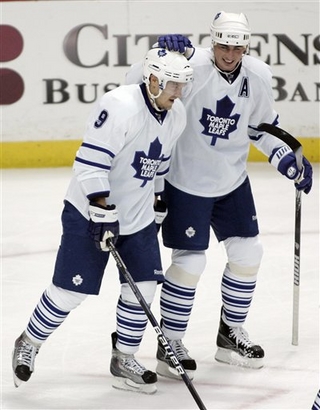 Niklas Hagman took first star in their first win of the year against the Anaheim Ducks. The face says, "Yay we won, but we still are bad."

The fans of blue and white had something to cheer about as the Toronto Maple Leafs finally posted their first win of the season.

Sure the Leafs beat a struggling “…not worth my time” Anaheim Ducks, but the win is still a win and it gives hope to the fans. Ok… maybe not that much hope, but a little.

The game itself was relatively back and forth, as through two periods only a goal separated the two teams as the Leafs were on top 2 – 1. The third period though was the straw that broke the camel’s back as the Leafs came out on fire. Two goals in under 7 minutes, and another for safe measures just past the 10 minute mark to end their scoring for the night. Anaheim did make an attempt to come back, but only scored one more time with only 7 minutes not enough time to go in the game. The final score was Toronto 6, Anaheim 3.

The highlights of the night were Niklas Hagman’s abnormal hat trick, Tomas Kaberle’s helping hands, and Jonas Gustavsson’s return from the injured reserved.

Hagman put up three goals for the night, leading the scoring charge for the Maple Leafs. All three of those goals came on the power play, one in each period.

Kaberle assisted on four of the six goals, as well as netting a goal himself. Fantasy owners were jumping for joy as all his assists were on the power play, and his goal was a power play goal also.

Gustavsson posted his first win in the NHL, saving 25 of the 28 shots against. Not incredible numbers, but nonetheless, he will remember this one forever. Gustavsson afterwards commented, “It’s late in Sweden; I don’t know if they’ll all stay up, but I hope they saw some of it”.

Colton Orr (TOR) and George Parros (ANA) dropping the gloves 3 minutes into the game was a bit of foreshadowing as the two teams had an incredible amount of penalties between them. Orr took a 10 minute misconduct for pushing the linesman away from stopping their fight. Parros, not to be out doen, took a 10 minute misconduct as well later in the game. Twenty-seven penalties totaling 76 minutes. Twenty three of those were minor penalties with the majority of them being roughing. Five of the six goals scored by Toronto were on the power play, an impressive 83% conversion rate. Oddly enough though, because of all the penalties, only 1 player from Toronto ended up with a +1 while the rest were at zero or negative. On the flip side, Anaheim had 7 players with a positive plus minus rating, two of which were +2.

The game was emotional for both teams, both showing their frustrations with their losing seasons. Neither team are going to build any momentum off of this game, only to later have more frustrations when they play better caliber teams.