Franzen out with torn ACL 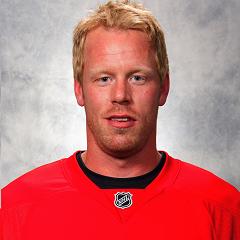 The latest loss for the Detroit Red Wings didn’t come on the scoreboard.

Johan Franzen will be out of the lineup for a minimum of four months after suffering a torn ACL during last night’s game with the Chicago Blackhawks. Detroit won the contest 3-2 with Franzen scoring the eventual game-winning goal.

General Manager Ken Holland said he didn’t know when or how the big forward injured his knee, just that he said it was bothering him after the game.

“He woke up with his knee swollen and full of fluid. We sent him for an MRI. Obviously surprising,” said Holland. The Red Wings recalled forward Justin Abdelkader to fill the empty roster spot for this Saturday’s contest against the Washington Capitals.

Franzen has suffered knee injuries in each of his last three seasons with Detroit, all of them happening during a game with the Chicago Blackhawks.

This is a big loss to the Red Wings,  a team already trying to find ways to replace the goals lost by departed free agents Marion Hossa, Jiri Hudler and Mikael Samuelsson. Franzen, who started off playing on the top line with Pavel Datsyuk, had 61 goals with Detroit in his past two seasons combined. I would expect Babcock to eventually counter by shifting Zetterberg onto the top line with Datsyuk to help generate more offense. Datsyuk and Zetterberg are dynamite when they play together and I’m sure that Babcock won’t be able to resist temptation for too long.

Babcock may also consider moving free agent acquisition Todd Bertuzzi onto the top line with Datsyuk and Tomas Holmstrom. Bertuzzi, once one of the league’s premiere power forwards, would benefit heavily from ample time on a line with Datsyuk. Rookie Ville Leino will probably also benefit from the situation. Leino has shown great skill and a wonderful hockey sense during his time with Detroit. Whatever Babcock decides to do with Zetterberg and Datsyuk, expect Leino to get more playing time and perhaps a promotion to the second line.