From Phoenix with Love 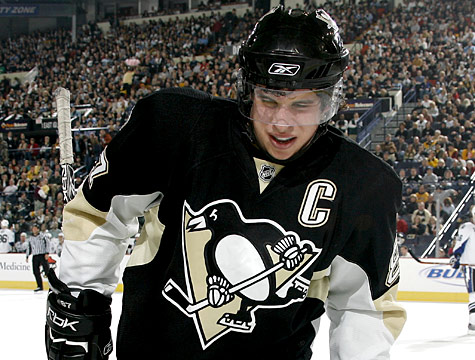 Miss Cleo has phoned in, Sidney Crosby and the Penguins have more losses in their near future.

Despite the impression given form the announcers that Sid the Kid is as good as 2 guys combined, the defending Stanley Cup Champions suffered their first loss.

I am well aware that the season is long, that the Phoenix Coyote’s will not make the playoffs, but nonetheless, a 0-3 loss is still being shut down.

Ed Jovanovski started the scoring for Coyote’s in the 1st period as he netted a power play goal assisted by Captain Shane Doan and Adrian Aucoin. Mid way through the 2nd, another power play goal was scored as Petr Prucha put the puck pass goaltender Brent Johnson’s glove. Prucha, might I add, was on his side when he scored. Radim Vrbata and Robert Lang with the assists. The last goal came in the ending minute of the 3rd as Radim Vrbata picked up his second point, putting home an empty netter that was assisted by Martin Hanzel.

The Phoenix Coyote’s are off to a good start as they are now 2-0. Tomorrow they face the Buffalo Sabres and have the ability to continue their win streak. Returning forward Radim Vrbata now has 3 goals and 1 assist in these two games, as he currently leads the Coyote’s in goals and points. (It is early, but someone did write about his return being a positive to the Coyote’s roster)

Nothing to fear for the Pittsburgh Penguin fans as it is still early, and only one loss. However, the next four games will not be easy for the Pens. They begin their road trip against the undefeated Philadelphia Flyers (Someone wrote about them too), then to Toronto against the Maple Leafs, followed by a trip to Ottawa against the Senators, and finally ending their travels with the Carolina Hurricanes.

This may be going out on a limb, but I say the Penguins lose 3 of the next 4 games. Losing to Philly and the Maple Leafs, leaving a toss up against the Senators and Hurricanes.