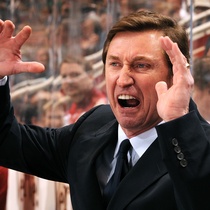 Wayne Gretzky has parted ways with the Phoenix Coyotes, stepping down as head coach and director of hockey operations.

With the continuing uncertainty of the Phoenix Coyote’s franchise in Arizona, head coach Wayne Gretzky has stepped down.

The decision was made by Gretzky himself, quoted as saying on his site Gretzky.com, “This was a difficult decision that I’ve thought long and hard about. We all hoped there would be a resolution earlier this month to the Coyotes ownership situation, but the decision is taking longer than expected.”

Gretzky went into more detail on his decision to step down, “Since both remaining bidders have made it clear that I don’t fit into their future plans, I approached General Manger Don Maloney and suggested he begin looking for someone to replace me as coach. Don has worked hard and explored many options. I think he has made an excellent choice, and so now it’s time for me to step aside.”

Wayne Gretzky thanked the organization, stating he, “…often said it was the greatest honour and privilege I could imagine to be able to play in the National Hockey League.  I feel the same way about being an NHL coach.  I’ve loved the four years I spent coaching the Coyotes.  Not a day went by when I took it for granted, and I will miss the competition of the NHL dearly.  It was an honour to hold the position, and I will always consider myself especially fortunate to have had this opportunity.”

Perhaps though the most diplomatically, and potentially foreshadowing words he wrote were , “I want to thank every staff member of the Phoenix Coyotes, past and present.  It was a real pleasure to work with each and every one of you. I’ve always said that Phoenix is a great sports city and deserves nothing but the best.  I still believe that. As a young boy, I learned to play hockey in Southern Ontario, and I know what great fans they have there.  It’s my hope they too will have an NHL franchise in the not too distant future.”

Stepping down perhaps is the best thing for the organization, as criticism mounted about his excessive pay and lacking results. Gretzky, the “Great One” on skates, had a 143-161-24 record during his 4 years as head coach of the Coyotes, never once making the playoffs.