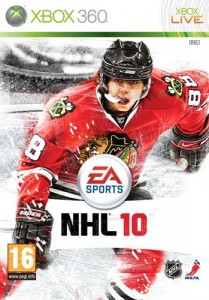 As many of you know, EA Sports released its latest version of their NHL game last week, NHL10. This years game includes several new features to make hockey fans drool, and fall in love with the EA Sports NHL franchise all over again. Straight from the back cover, the games new features include:

1. New Battle For the Cup Mode – Experience the intensity of NHL playoff hockey. Play through injuries, intimidate rivals, and match lines as storylines carry across the entire series.

3. Battle on the Boards – Shield the puck with your body, kick-pass it to a teammate, or pin your opponent against the boards with an all-new board play engine.

4. All-New First-Person Fighting – Change the momentum by trading blows with an NHL enforcer. Tug an opponent’s jersey to gain an advantage – before or after the whistle.

5. Become the Ultimate Pro – Improve your draft status by dominating the prospects game, then use new coaching tips, improved teammate AI, and detailed position instructions to build the ultimate career.

Matt: I picked up the game on the day it was released, at 8 in the morning. Needless to say, I was pretty excited about it. I considered leaving work several times just to go home and play, unfortunately, I did not do it. The NHL franchise by EA Sports is the sole reason I even own an Xbox360. I bought it just for NHL 09, and now own NHL 10 as well.

The features included in NHL 10 make it a great upgrade over its predecessor. It has so much depth that in a weeks worth of playing, I have not even begun to explore just how much you can do within the game. The replay value is through the roof.

I have spent most of my time, thus far, on the Be a Pro mode. So far I am thoroughly impressed with the new offerings. The improved teammate AI is definitely noticeable. In ’09, my pro really struggled with assists because one timers failed to work and my teammates never crashed the net. Now I find myself racking up 2 or 3 assists per game by making some sick passes.

Being a gear junkie, all the things you can do to your pro are a great feature. This year, I can now suit up my player going tounges out with a pair of white Easton SE16 skates. I was surprised, however, to see no Easton S19 hockey stick in the game.

Downfalls of the game are hard to find, but I’ve noticed a couple. While going through the Be a Pro, I played well in the prospects game, and ended up being the number two overall draft pick. The team that selected me…the Boston Bruins. How they ended up with the second pick in the draft is beyond me. Then I play in three games at the NHL level, picking up 12 points, and got sent to the minors. I know the Boston line up would be hard to crack, but those kind of numbers do not justify being sent to the minors.

Anyway, NHL 10 is everything I want it to be and more. The replay value is ridiculous. Online play alone will keep me attached to the game until NHL 11 comes out in a year. I think the price tag for games is becoming overwhelming at $60 a pop, but for anyone who loves hockey, this game is completely worth it.

Eric: The game itself has many additions that make the game not only more realistic but fun.

The addition of more goalie animations like stacking the pads and rotate them in the air to the other side just like Martin Brodeur, the ability to hug the post by holding the right trigger opposed to last years automatic hugging which allowed for difficult saves to be made against the cross crease goals, as well as a few more additions equipment selections to make your goalie to your liking.

As forward their is more equipment, shields that can be just about any color of the rainbow, as well as colored stick tape. Although it may be unrealistic to some bit, it is neat seeing a team online who sports all the same color stick tape that goes along with their jerseys, or even the ability to choose pink or purple to raise awareness to varying cancers much like the NHL does. Also the much needed kick fake as well as being tripped to your knees and still being able to shoot the puck. And lastly, my most favored addition is that of being able to pin someone against the boards. Board play brings another element of game play which could either make or break how a team plays.

Part of the appeal to NHL 09 as well as NHL 10 is the rating system. After you complete a game, you are then rated on position, stats and team play. Depending on your play, be it a lot of turnovers or scoring 5 goals, your rating will vary. With a combination of having good ratings and a specific number of game sunder your belt, you then unlock player cards (rookie on up to legend) that allow you more credits to distribute to your player to make him better. To bypass this, this year EA offered you the ability to unlock or purchase  predetermined bonus packs. These bonus packs are predetermined point values added to a specific attribute such as slap shot power. With this addition, which is mainly making Microsoft and EA more money, it takes away from the gratification of working hard and earning your reward of a better playable character. That being said, anyone with gold equipment are, well not anyone I think too highly of.

My take is more geared for online play, as I myself have even signed up at League Gaming’s NHL League.  League Gaming puts you into a real hockey experience, with NHL Owners, GMs, Captains, a live draft, trades, Juniors and the overall NHL experience as you and your 19 human counterpart team faces off against other human teams to make a fun, and competitive realistic experience. (Any questions feel free to email me at EB@hockeyworldblog.com)