No greater is the need to have a winning season other than right now for the Phoenix Coyotes. With the future of the team in question, the team must go on and is doing so.

The team has made only few acquisitions to increase depth and talent. Starting with goalie, Jason Labarbera has signed with the team. Last year Labarbera split his time between two clubs, the L.A. Kings and the Vancouver Canucks. Combining his stats, he posted 8 wins, 10 losses and 6 overtime losses in 28 games with a .901 save percentage. His expectations should be no more than providing a solid back up position to starting goalie Ilya Bryzgalov.

The Phoenix Coyote’s seem to be transitioning into a more puck moving club, as they have gotten rid of their enforcers. Last season Daniel Carcillo was traded to the Philadelphia Flyers, as this season they have decided not to sign right wing Brian McGrattan to the Calgary Flames. The Flames have also picked up Nigel Dawes off of waivers from the Coyotes.

Perhaps the only two other players to make note of that will be joining the Coyote’s roster is that of defenseman Adrian Aucoin and the return of forward Radim Vrbata.

Aucoin holds an Olympic silver medal from 1994, played in the NHL All Star game in the 2003 – 2004 season and is a solid defenseman. The veteran defenseman will be able to provide wisdom and knowledge to the relatively young defense of the Coyote’s, as well as production on the power play. 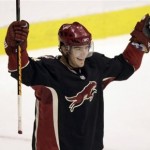 Young forward Peter Mueller will be reunited with the return of winger Radim Vrbata.

The return of Radim Vrbata should ignite some offensive sparks with young forward Peter Mueller.  Vrbata winged a line of then rookie Peter Mueller. Together they were able to provide an offensive threat, combining for 49 goals, 61 assists totaling 110 points.

The Coyote’s have the talent to be a good hockey team. Captain and excellent two way player Shane Doan, up and coming Scottie Upshall, as well as veteran assistant captain Ed Jovanovski. The team was on pace to make the playoffs last season, only to fall hard and ending in 13th place. With the club’s future in question, even the question of Wayne Gretzky being head coach, the team could be an absolute wreck with the side distractions, or have an excellent season later to be made into a sports motivational movie.