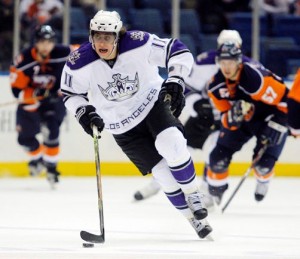 Let’s face it, the Los Angeles kings have been one of the NHL’s worst teams in the post lockout era. They’ve struggled a lot, posting only one winning season since that time. It’s easy to say that the Kings are in the midst of a rebuilding effort, but when will fans in LA see some results?

Slowly, but surely, the pieces to the puzzle are being put in place. Last season, rookie Drew Doughty was a stud defensively, playing roughly 20 minutes per game and posting 6 goals and 21 assists. Great numbers for a rookie D-man in LA and his minus 17 rating will surely improve as he gets more experience under his belt. Jack Johnson, another young defenseman, is hoping to put together a healthy season after missing 41 games last year due to injury.  Both young men are big bodies who can hit well and block shots. Doughty measures in at 6-1 and 219lbs while Johnson, who signed a new two year contract over the summer, is steady at 6-1 and 225lbs.

Alongside the young guns, the Kings signed Rob Scuderi to a four year deal to add some depth to the defense. Scuderi, who had spent his entire career with the Penguins, and won a Stanley Cup last season, will certainly provide some veteran leadership on the blue line and in the locker room as well. His “been there before” attitude will be the perfect addition to a growing squad.

Offensively, the Kings feature a gifted top line of Dustin Brown, Anze Kopitar and Alexander Frolov. While all three are tremendous athletes, they collectively slumped in 2008-09, each posting a dip in points from the previous year. Kopitar looks to have the most potential of the group, providing 32 goals and 45 assists in 07-08. Opposing defenses better watch out for him this year, as he really has something to prove. A 100 point campaign is certainly not out of the question for a guy like Anze.

Newcomers Ryan Smyth and Justin Williams will provide some great scoring depth for the Kings. Williams is also looking for his first healthy season in a while. His last full season was 2006-07 with the Hurricanes where he contributed 33 goals and 34 assists. Smyth, acquired via trade, will provide a big body in front of the net and should be able to chip in around 30 goals and 30 assists throughout the season.

The biggest question mark on the Kings roster is in the goaltender position. Will Jon Quick hold on to his starting spot, or will Erik Ersberg take over? Quick posted a winning record last season while recording a .914 save percentage and 2.48 goals against average. He added four shutouts to his resume as well.

The Los Angeles Kings are set to make big strides this season. Whether they can play up to their potential is yet to be seen. Expect an improvement over last seasons record, however, with a winning season in LA.