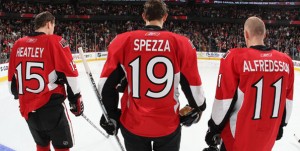 Armed with the ever dangerous trio of Daniel Alfredsson, Dany Heatley, and Jason Spezza, it’s hard to think that this team would not be a Stanley Cup contender year after year. It would even be wise to suggest that they might make a great run in the playoffs this upcoming season, except there’s one problem, the ongoing Dany Heatley saga. With the public request for a trade earlier this summer, he may have destroyed any remaining chemistry he had with teammates, both on the ice and off.

This isn’t to say that the Senators will be a complete disappointment this year, however. They are still quite capable of improving on last seasons 83 point effort. With or without Heatley, the Ottawa Senators have strengthened their team by adding some firepower and a new goaltender.

First, the Senators re-signed gritty forward Chris Neil. His point totals continue to decrease each season, but he is far more valuable as an enforcer than a goal scorer or play maker. Neil, along with Jarkko Ruutu, make quite a potent combination of toughness on the Senators roster.

Perhaps the biggest off season transaction for the Sens was their signing of Alex Kovalev. If he can regain his scoring touch from the 2007-08 campaign, Alex will be worth every penny of the $10 million 2 year contract he signed.

While the Senators have struggled in the goaltending department recently, they are hoping to have all their problems solved this season. Since 2007, there has been a lack of a real starter as Martin Gerber, Ray Emery, Alex Auld and Brian Elliot have all split time between the pipes. Things are looking clearer now, however, as Pascal LeClaire was acquired via a trade deadline deal back in March. With a healthy LeClaire starting and a hopeful Brian Elliot as back-up, a return to the postseason might be in the works for Ottawa.

Defensively, the Sens will remain capable of shutting down the opposition. They return key veteran defenseman Filip Kuba and Chris Phillips to man the blue line. The rest of the defense is young, but strong, with Chris Campoli leading the way.

It’s going to come down to the wire in the Northeast Division this season, but the Senators are definitely in the thick of things. In the end, it looks like it could come down to Dany Heatley and how much big of a role he will play in the offense this season.