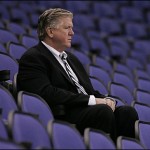 Bran Burke's decisions to add grit and size may leave him all alone in thought depending on the teams success this year.

The Toronto Maple Leafs look to be better this season as general manager Brian Burke intends on rebuilding the team similarly as he did the Anaheim Ducks; big and strong.

Offensively, the team added free agents Colton Orr from the New York Rangers in addition to acquiring Wayne Primeau in a trade with Calgary. Last season Primeau missed 56 regular season games as well as 6 playoff games with a broken foot, which will be a concern for the team as in the last two seasons he has only played a total of 67 games out of the 164 games possible. Orr will add the much needed enforcement to the Leafs as in the ’08-’09 season he had a respectable 193 minutes in 82 games played. This will allow defenseman Pavel Kubina, who led the team in penalty minutes last season with 94, a break from the box as his 40 points was best amongst defenseman and is much more needed than roughing it up.

Defensively the Leafs added free agents Francois Beauchemin from Anaheim and Mike Komisarek from Montreal. Once again similar to Primeau, Beauchemin missed 63 games last season with a torn ACL and will be a concern for the upcoming year. When healthy, expect him to be an average defenseman who hovers around zero in the +/- department, but will add 6’ 0” and 207lbs of clearing people out in front of the net. And similar to Orr, Komisarek will add even more enforcement as last season the defenseman put up 121 penalty minutes in 66 games. Komisarek, who stands 6’ 4” and weighs 243lbs, will also be able to assist in clearing people out from in front of the net. 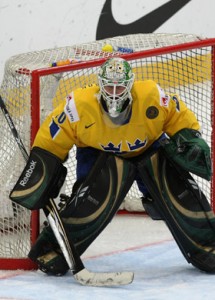 With a 1 year contract, all eyes will be on Jonas "the Monster" Gustavsson to prove he is the goalie of the future.

The last spot to mention is that of goalie, as the team has signed Jonas “The Monster” Gustavsson. The goaltender stands 6’ 3” and weighs 192lbs, but is as agile as any goalie within the league. With all the hype surrounding the 24 year old Swedish goaltender, if it proves to be accurate, he may be the next Martin Brodeur. Last season in the Swedish league in 82 games played, he had an astonishing 1.96 goals against average and a .932 save percentage. This is nothing compared to last year’s playoffs, where he allowed 14 goals in 13 games played. That equates to a 1.03 goals against average and a .961 save percentage. In those games, the Monster recorded 5 shutouts. He has already been quoted as wanting the starting position that currently belongs to Vesa Toskala, which is to be expected as Gustavsson only signed a 1 year contract with the team. With the addition of backup goaltender Joey Macdonald, it is not farfetched that a goalie battle is going to happen. The battle between who is the question. Both Toskala and Macdonald become unrestricted free agents as Gustavsson is a restricted free agent at the end of the season.

Burke has added size in all positions, even goaltender, however with the mentality of speed is the new way to go, it will be interesting to see how everything panes out. It did work for the Anaheim Ducks; maybe it will work for the Toronto Maple Leafs.