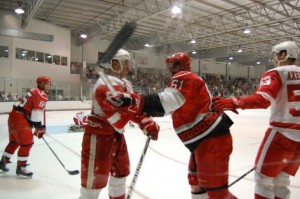 One of many pictures from Tape to Tape.

Tape to Tape, who is run by Doug, is a Peoria Rivermen expert. Doug has all the insight of future NHLers as the Rivermen is the AHL team to the St. Louis Blues.

Once again, Hockey World Blog is grateful to Tape to Tape and we highly recommend you visit the site.