The Philadelphia Flyers have made numerous off season acquisitions that brings one word to mind: “tough”. 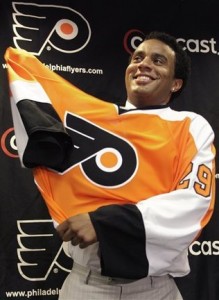 Baby blue eyed goaltender Martin Biron will be replaced by bad boy Ray Emery. Emery played last season in the KHL posting 22 wins in 36 games with a 92.6 save percentage and a 2.12 goals against average. The numbers show immense improvement from playing with the Ottawa Senators in the ’07-’08 season, however the quality of play overseas is questionable in comparison to the NHL. A question that will be answered in time is whether or not his act as cleaned up? This though of course may or may not be wanted by the rough Philly fans.

The blue line has gained size and grit as Chris Pronger and Ole-Kristian Tollefsen will be donning the orange and black this season. Pronger, a seasoned veteran and a Stanley Cup winner, may be the most significant off season acquisition for the Flyers run for the cup. Pronger currently ranks 4th in playoff experience among NHL defenseman with 143 games played.

Offensively the Flyers have lost right wing Mike Knuble to Washington, however have replaced him with Ian Laperriere from the Colorado Avalanche. Tit for tat Knuble puts more points on the board, however when it comes to enforcing, Laperriere takes the cake. Pair him up with last season’s pickup Daniel Carcillo, it will be interesting to see what team dares to take any liberties with goal scorers Danny Briere, Simon Gagne and captain Mike Richards.

This year the Flyers have a very competitive team, a well balance of grit and finesse that will be a force to be reckoned with. Look for them to be competing fiercely for first place within the Atlantic divison as well as the Eastern Conference. The last question to be asked is how soon before the Broad Street Bullies trademark is restored to this season’s roster.