After coming out on top in a game seven nail-biter against the Detroit Red Wings this past June, the question on the minds of many hockey gurus is whether or not the Pittsburgh Penguins can repeat this season as Stanley Cup Champions. Despite very few free agency losses, the Penguins will need to tighten up defensively as a team and play with more consistency if they are to repeat as champs again this year. 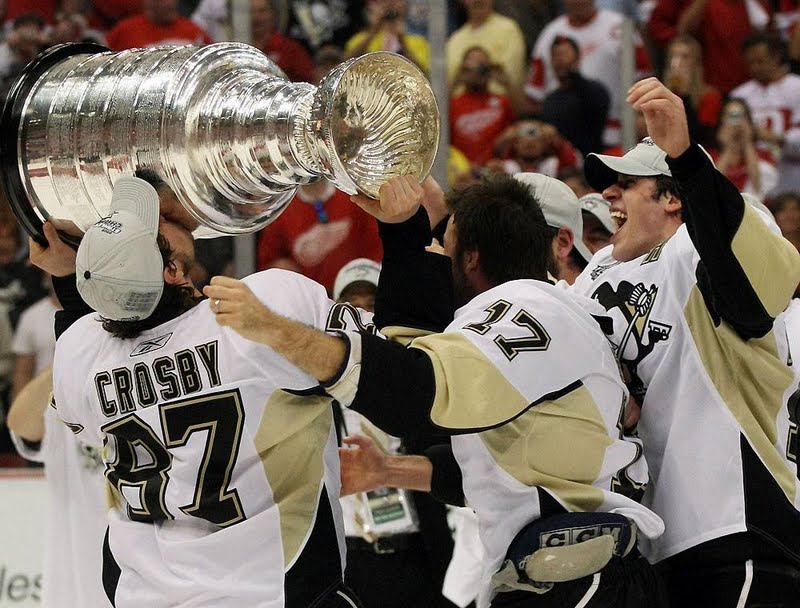 On the plus side, the Penguins have a strong core of last year’s championship team returning this season, including two of the most potent offensive threats in the NHL. Last season, 22-year-old captain Sidney Crosby posted 33 goals and 70 assists for a grand total of 103 points. This was second on the team to 23-year-old Evgeni Malkin, who tallied 35 goals for a whopping 113 points. Neither of these two slowed down much in the playoffs where they notched 31 points and 36 points respectively. These two lead an all-star cast of young talent that also includes forward Jordan Staal and goaltender Marc-Andre Fleury.

However, a budding offense might have to overcome a lackluster defense this year if the Pens hope to repeat. Veteran defenseman Sergei Gonchar is back to man the blue line, but the Penguins lost key defensemen Hal Gill and Rob Scuderi to free agency in the offseason, which means that many new and young faces will be called upon to pick up the defensive slack. How well these new faces come along could greatly influence how Pittsburgh performs this year.

Marc-Andre Fleury will also need to step up his consistency and have a good regular-season run in addition to a great post-season performance. Fleury has a tendency to be inconsistent during the regular season but has bounced back the past two years with stellar playoff performances.

Keep an eye on Alex Goligoski this season as he is primed to step into the shoes left by departed free agent defenseman and help this team in a big way. In 45 games with the Penguins last season, Goligoski tallied 20 points and was plus-5. Look for him to build upon that success this season. Chris Kunitz was a great addition at the trade deadline last year and should continue his success into this year. The big-bodied forward doesn’t mind playing hard and produced 18 points in 20 regular season games with the Penguins and another 14 points in 24 playoff games. Kunitz should excel on the wing for either Crosby or Malkin. And don’t count out veteran right wing Bill Guerin. Even at age 38, Guerin has something still left in the tank and will benefit from playing the wing for Crosby.

The Penguins have the offensive prowess, but it remains to be seen if the departed free agents on the blue line will hurt their cause. Regardless, this is a young team and they are hungry to continue to prove themselves. Playoff-bound at the very least, but anything beyond that is anybody’s guess.