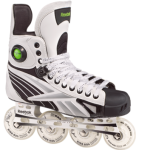 This fall, Reebok will release their 2010 line of roller hockey gear. While many people are getting tired of the primarily white high end skates, I think Reebok has nailed the design of the Reebok 8k with an outstanding combination of white and black. They have left the bold, colorful designs of previous years in the past, and gone for a more traditional style for 2010. Out of every upcoming skate for the 2009-10 season, this one is my favorite based on looks. 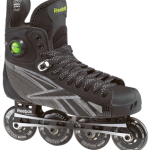 When it comes to performance, however, I’m not so sure what to expect. Reebok skates feature the Tri-Diameter Lite chassis, which allows for a 72-76-76-80mm wheel setup (from front to back). It’s sort of a hybrid between the old Mission Hi-Lo, and the current Labeda Hum’er setup. Generally, this kind of setup will give you both speed and agility when skating, which is great for any player. Unfortunately, in past years, the Tri-Di aluminum chassis has been known to be a little suspect in the durability department.
If you like a real traditional looking black skate, and want top end performance, the Reebok 10k might be for you. But with top of the line features, comes a top of the line price. These skates are sure to retail for anywhere between $400 and $500.

Fortunately, for me at least, the Reebok 8k will retail for a bit less. I am really eager to see the skate in person, as well as the rest of the 2010 Reebok roller hockey line. It would appear as though Reebok is taking giant steps in the right direction with their upcoming roller hockey gear.