Just a quick tidbit from some Google searches today that I thought I would share. Any fan of bone-crunching hockey hits is undoubetly familiar 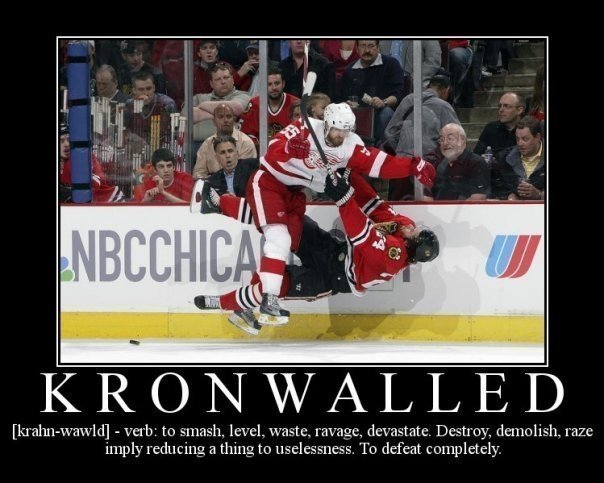 with Niklas Kronwall, the young and talented defenseman for the Detroit Red Wings who helped make a name for himself during Detroit’s 2007-2008 Stanley Cup run as the deliverer of mammoth hits the size of Tsunamis. Kronwall furthered his reputation during this past playoff run with an earth-shattering hit delivered to Chicago’s Martin Havlat that earned the Swedish defenseman a 5-minute major and a game misconduct.

In many hockey circles, the delivery and execution of one of these massive checks has begun to be referred to as getting “Kronwalled.” That’s why I was fairly amused when I came across the following image during a Google search today which clearly defines the act of a Niklas Kronwall hit (right).

For those of you who aren’t familiar with the freight train that is Nik Kronwall, I’ve also dug up a quick video for you of the Kronwall hit on Marty Havlat during the Western Conference Finals this past spring. You can check out the video: Havlat Gets Kronwalled

Needless to say I think the real reason that Havlat signed with Minnesota was to get out of the Central division and have less opportunities to get “Kronwalled.” Shoulda gone to an Eastern Conference team, Marty.