Advertising On Uniforms: Coming Soon to the NHL?

It’s been approximately 30 years since the NHL allowed commercial advertising on the boards. Now, we are so used to seeing ad’s all over the boards, ice, and other places around the rink, that it looks weird whenever we do not see ad’s on the boards (such as your local rink and arena’s that host the NCAA hockey tournament).

There’s already a lot of advertising during an NHL game. Ad’s on the stairs that strategically face the main TV camera, superimposing a logo over the crowd when entering or returning from a commercial break, and even behind the benches.

Professional leagues in Europe already have advertising all over the uniforms (such as the photo seen here) but how would be be taken here in America? 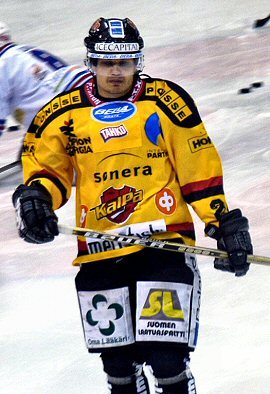 Would NHL jersey's of the future look like this with the amount of advertising?

In a age where the money towards sponsorship has decreased  because of the recession, teams will have to be more creative when it comes to increasing revenue if the fans cannot afford full-season ticket plans and suites.

The other professional sports in the United States have slowly dived into this new realm. The NFL has allowed teams last year to sell advertising on it’s practice uniforms. Only a handfull of teams have done so, with one example being Atlantic Health forking over $2 Million to the New York Jet’s for their logo to be placed on the practice jerseys and for the naming rights of the Jet’s practice facility.

In the NBA, the league just recently allowed teams to sell advertising on their practice uniforms. Deputy commissioner Adam Silver told USA Today that they are exploring the option of advertising on game jerseys.

As for Major League Baseball, they are not exploring it. They did allow it during the World Baseball Classic.

In hockey, it would take some getting used to seeing several companies logo on a jersey. I think some of the pure hockey fans would not be down with the idea of seeing Little Caesars plastered all over the uniformof the Detroit Red Wings. Or ATT on a Dallas Stars jersey.

In my opinion, I’m about maximizing revenue’s in the most efficient way possible. There’s already subtle advertising on the uniform’s already with the logo of the equipment manufacturers. So why not throw a sponsor or 2 on the uniforms. It just might save a team such as a Coyotes or Islanders. However, I am not down with plastering it in every square inch possible like NASCAR. I would be content with certain places and size restrictions. Places such as the helmet, socks, pants, jersey sleeves, and the bottom of the jersey in the front and back. Keep the area from the logo and above clean as well as above the number on the back clean.

What I dont want to see is what they have done in the WNBA and soccer, where the logo of the sponsor is bigger than the team’s logo itself. I don’t want to see the National City logo across the chest and a small Columbus Blue Jackets logo in the top corner.

advertisingeuropelogosnascarsoccerwnba
← Previous Story Let The Countdown Begin!
Next Story → Time for sniper to be a team player