Prospal Bought Out by Bolts 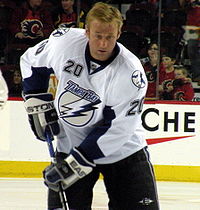 The Tampa Bay Tribune reported earlier today that Prospal was infromed that his contract will be bought out by the Tampa Bay Lightning one year after signing a four-year, $14 million contract with the Bolts.

“After fully evaluating our roster and our position in the salary cap world, we arrived at the decision to buy out Vaclav Prospal from his contract,” general manager Brian Lawton told the Tribune. “We appreciate Vinny’s service to the Lightning, but in the best interest of the team, we believe a difficult decision needed to be made in this case, and we are going to move ahead without him. We wish Vinny all the best.”

The star left wing resigned with the Tampa Bay Lightning last summer after the team traded him to the Philedelphia Flyers at the 2007-08 trade deadline. Between the two clubs, Prospal netted 33 goals for 71 points, including 14 points in 18 games with the Flyers. That campaign was followed up last season with one of the worst of the 34-year-old veteran’s career by posting 45 points in a full 82 games with Tampa Bay.

Prospal has 24 hours to either accept the buyout or choose to be placed on waivers. If he accepts the buyout, Prospal will become an unrestricted free agent eligible to sign with any club he chooses. Tampa Bay will take a cap hit of $1.167 for the next six seasons to compensate for the buyout.