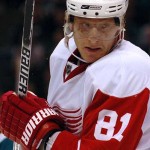 Reports are circulating about winger Marian Hossa of the Chicago Blackhawks undergoing shoulder surgery to repair his right rotator cuff. Hossa, who was acquired from Detroit Red Wings in the free agency, is expected to fill Martin Havlat’s void in the Blackhawk lineup. Marian posted 71pts in 74 regular season games as well as 15pts in the post season last year.

With surgery expected to be done July 24 and a 4 month recovery, fans should not fear his absence, as the youthful duo Jonathan Toews and Patrick Kane should be able to maintain the level of play from last year’s season. Concerns still would arise after the fact. Could the surgery affect Hossa’s game? And if it does affect his game, will the Blackhawks make the post season? And how far will they go if they do? Potentially the most concerning, with a 12 year contract, is this the start of another injury plagued Marian?

Time will tell what all plays out. Regardless, the Chicago Blackhawks should be a great team to watch this upcoming season and seasons to come in arguably the most competitive division in the western conference.